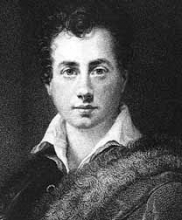 George Gordon Byron, 6th Baron Byron, later George Gordon Noel, 6th Baron Byron, FRS (22 January 1788 – 19 April 1824), commonly known simply as Lord Byron, was a British poet and a leading figure in the Romantic movement. Among Byron's best-known works are the lengthy narrative poems Don Juan and Childe Harold's Pilgrimage and the short lyric "She Walks in Beauty." He is regarded as one of the greatest British poets and remains widely read and influential.

He traveled to fight against the Ottoman Empire in the Greek War of Independence, for which Greeks revere him as a national hero. He died at 36 years of age from a fever contracted while in Missolonghi in Greece.

Byron was celebrated in life for aristocratic excesses including huge debts, numerous love affairs, rumors of a scandalous incestuous liaison with his half-sister, and self-imposed exile. -- from Wikipedia