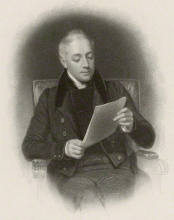 John Murray (1778 – 27 June 1843) was a Scottish publisher and member of the famous John Murray publishing house.

The publishing house was founded by Murray's father, who died when Murray was only fifteen years old. During his youth, a partner, Samuel Highley, ran the business, but in 1803 the partnership was dissolved. Murray soon began to show the courage in literary speculation which earned for him later the name given him by Lord Byron of "the Anak of publishers", a reference to Anak in the Book of Numbers.

In 1807 Murray took a share with Archibald Constable in publishing Sir Walter Scott's Marmion. In the same year, he became part-owner of the Edinburgh Review, although with the help of George Canning he launched in opposition the Quarterly Review in 1809, with William Gifford as its editor, and Scott, Canning, Robert Southey, John Hookham Frere and John Wilson Croker among its earliest contributors.