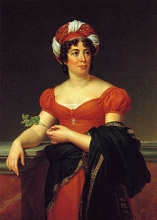 Anne Louise Germaine de Staël-Holstein (22 April 1766 – 14 July 1817), commonly known as Madame de Staël, was a French woman of letters of Swiss origin whose lifetime overlapped with the events of the French Revolution and the Napoleonic era of which she was a principal opponent. Celebrated for her conversational eloquence, she participated actively in the political and intellectual life of her times. Her works, both critical and fictional, made their mark on the history of European Romanticism. --from Wikipedia