Two brief clips from Romantic Circles' Poets on Poets series will be included in today's broadcast of the CBS Weekend Roundup radio program, contrasting our recording of "I Wandered Lonely as a Cloud" by poet Charles North with the rap version performed by the creation of the tourism board, "MC Nuts," a Lake District Red Squirrel.

The May 4, 2007 show can be accessed at the CBS Weekend Roundup podcast page or can be downloaded directly at:

ImageText, an interdisciplinary comics studies journal, is pleased to announce the publication of their special issue on "William Blake and Visual Culture," now available here.

Greek students demonstrated yesterday in Athens, demanding the return of the Elgin Marbles, represented of course in Keats's famous sonnet but also in Byron's satire, "The Curse of Minerva." 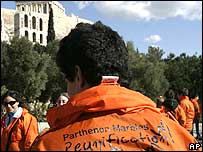 John Constable regarded the six foot-long landscapes that he began to paint in 1818–1819 as his most serious and significant achievements. This exhibition will focus on these great paintings and the full-size oil sketches for them. See the Gallery's Website for more information.

"The British Library has acquired the archive of Samuel Taylor Coleridge's extended family, a mass of papers and bound volumes dating from the middle of the 18th century to the beginning of the 20th...."

Dr. Betty T. Bennett, distinguished professor of literature and former dean of the College of Arts and Sciences at American University, Washington, D.C., died at Sibley Hospital on Saturday, August 12, after an heroic five-year battle with lung cancer. She was 71.

A copy of Shelley's long-lost "Poetical Essay" ("On the Existing State of Things") in support of radical journalist Peter Finnerty, published 1811, reccently showed up at auction and was purchased by a London bookseller. This story in the TLS provides useful context.

A J.M.W. Turner watercolor, "The Blue Rigi: Lake of Lucerne, Sunrise," has sold at auction for £5.832m--a record for a British watercolour. The painting was sold to an anonymous telephone bidder at Christie's in London. 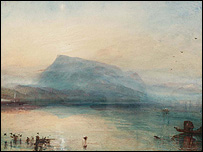 A new exhibit at Tate Britain opens this month and runs through August 28, 2006: "Constable, The Great Landscapes."

"This major exhibition offers the first opportunity to view John Constable's seminal six-foot exhibition canvases together. The 'six-footers' are among the best-known images in British art and comprise the famous series of views on the river Stour, which includes The Hay Wain (1820–21), as well as more expressive later works such as Hadleigh Castle (1829) and Salisbury Cathedral from the Meadows (1831)."

An audio file on the exhibit is available here.