THE FALSE RHYME.
BY THE AUTHOR OF "FRANKENSTEIN."

Come, tell me where the maid is found
Whose heart can love without deceit,
And I will range the world around
To sigh one moment at her feet."    --THOMAS MOORE.

ON a fine July day, the fair Margaret, Queen of Navarre, then on a visit to her royal brother, had arranged a rural feast for the morning following, which Francis declined attending. He was melancholy; and the cause was said to be some lover's quarrel with a favourite dame. The morrow came, and dark rain and murky clouds destroyed at once the schemes of the courtly throng. Margaret was angry, and she grew weary: her only hope for amusement was in Francis, and he had shut himself up--an excellent reason why she should the more desire to see him. She entered his apartment: he was standing at the casement, against which the noisy shower beat, writing with a diamond on the glass. Two beautiful dogs were his sole companions. As Queen Margaret entered, he hastily let down the silken curtain before the window, and looked a little confused.

"What treason is this, my liege," said the queen, "which crimsons your cheek? I must see the same."

"It is treason," replied the king, "and therefore, sweet sister, thou mayest not see it."

This the more excited Margaret's curiosity, and a playful contest ensued: Francis at last yielded: he threw himself on a huge high-backed settee; and as the lady drew back the curtain with an arch smile, he grew grave and sentimental, as he reflected on the cause which had inspired his libel against all womankind. 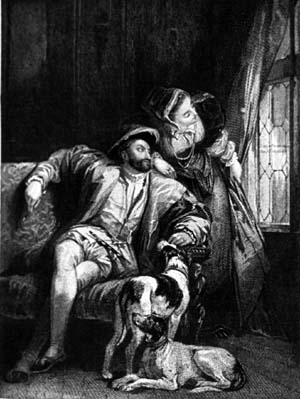 "What have we here?" cried Margaret: "nay, this is lêse majesté--

Very little change would greatly amend your couplet:-- would it not run better thus--

I could tell you twenty stories of man's inconstancy."

"I will be content with one true tale of woman's fidelity," said Francis, drily; "but do not provoke me. I would fain be at peace with the soft Mutabilities, for thy dear sake."

"I defy your grace," replied Margaret, rashly, "to instance the falsehood of one noble and well reputed dame."

"Not even Emilie de Lagny?" asked the king.

This was a sore subject for the queen. Emilie had been brought up in her own household, the most beautiful and the most virtuous of her maids of honour. She had long loved the Sire de Lagny, and their nuptials were celebrated with rejoicings but little ominous of the result. De Lagny was accused but a year after of traitorously yielding to the emperor a fortress under his command, and he was condemned to perpetual imprisonment. For some time Emilie seemed inconsolable, often visiting the miserable dungeon of her husband, and suffering on her return, from witnessing his wretchedness, such paroxysms of grief as threatened her life. Suddenly, in the midst of her sorrow, she disappeared; and inquiry only divulged the disgraceful fact, that she had escaped from France, bearing her jewels with her, and accompanied by her page, Robinet Leroux. It was whispered that, during their journey, the lady and the stripling often occupied one chamber; and Margaret, enraged at these discoveries, commanded that no further quest should be made for her lost favourite.

Taunted now by her brother, she defended Emilie, declaring that she believed her to be guiltless, even going so far as to boast that within a month she would bring proof of her innocence.

"Let us make a bet," cried Margaret: "if I lose, I will bear this vile rhyme of thine as a motto to my shame to my grave; if I win---"

"I will break my window, and grant thee whatever boon thou askest."

The result of this bet was long sung by troubadour and minstrel. The Queen employed a hundred emissaries--published rewards for any intelligence of Emilie--all in vain. The month was expiring, and Margaret would have given many bright jewels to redeem her word. On the eve of the fatal day, the jailor of the prison in which the Sire de Lagny was confined sought an audience of the Queen; he brought her a message from the knight to say, that if the Lady Margaret would ask his pardon as her boon, and obtain from her royal brother that he might be brought before him, her bet was won. Fair Margaret was very joyful, and readily made the desired promise. Francis was unwilling to see his false servant, but he was in high good humour, for a cavalier had that morning brought intelligence of a victory over the Imperialists. The messenger himself was lauded in the despatches as the most fearless and bravest knight in France. The king loaded him with presents, only regretting that a vow prevented the soldier from raising his visor or declaring his name.

That same evening as the setting sun shone on the lattice on which the ungallant rhyme was traced, Francis reposed on the same settee, and the beautiful Queen of Navarre, with triumph in her bright eyes, sat beside him. Attended by guards, the prisoner was brought in: his frame was attenuated by privation, and he walked with tottering steps. He knelt at the feet of Francis, and uncovered his head; a quantity of rich golden hair then escaping, fell over the sunken cheeks and pallid brow of the suppliant. "We have treason here!" cried the king: "sir jailor, where is your prisoner?"

"Sire, blame him not," said the soft faltering voice of Emilie; "wiser men than he have been deceived by woman. My dear lord was guiltless of the crime for which he suffered. There was but one mode to save him:--I assumed his chains--he escaped with poor Robinet Leroux in my attire--he joined your army: the young and gallant cavalier who delivered the despatches to your grace, whom you overwhelmed with honours and reward, is my own Enguerrard de Lagny. I waited but for his arrival with testimonials of his innocence, to declare myself to my lady, the Queen. Has she not won her bet? And the boon she asks----"

"Is de Lagny's pardon," said Margaret, as she also knelt to the king: "spare your faithful vassal, sire, and reward this lady's truth."

Francis first broke the false speaking-window, then he raised the ladies from their supplicatory posture.

In the tournament given to celebrate this "Triumph of Ladies," the Sire de Lagny bore off every prize; and surely there was more loveliness in Emilie's faded cheek--more grace in her emaciated form, type as they were of truest affection--than in the prouder bearing and fresher complexion of the most brilliant beauty in attendance on the courtly festival.

[2] Queen  [the first-edition variation in this word--sometimes capitalized, sometimes not--has been retained.]

The Last Man
About this Page