William Blake and the Study of Virtual Space: Adapting "The Crystal Cabinet" to a New Medium 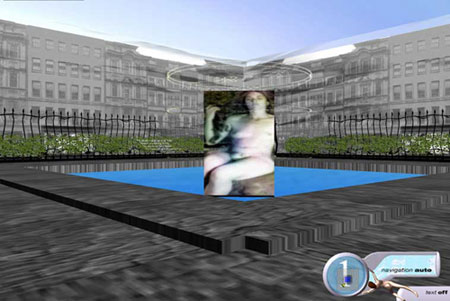 Blake and the Virtual Cabinet

The work shown is created in VRML, Virtual Reality Modeling Language. A VRML plugin is required, also the RealPlayer plugin.(Experience with VRML is recommended). It is greatly suggested that if you are unfamiliar with VRML that you explore smaller works first. These can be found on Mr. Guynup's website or on the VRML plugin website. Also note that a web3d help menu is accessible on the lower HTML portion of the Virtual Crystal Cabinet interface

Other works by Mr. Guynup <http://www.pd.org/~thatguy>

The majority of credit must be directed towards the continuing power and visionary legacy of William Blake. We are grateful for the ability to use his work and project it forward into the new virtual media.

One of the most controversial developers of virtual spaces in the world, Steve's works confront ideas and issues that represent the bleeding edge of three dimensional design. An eight year veteran in Web3D, he has presented at SIGGRAPH in 1998,1999 and 2000, won awards from Blaxxun and the Contact Consortium, and recently worked with 1996 Ars Electronica winner Andy Best on his Iceborg Project. Currently he is pursing a PhD in Communication at Georgia State University.

An assistant professor in 18th century literature in Georgia Tech's School of Literature, Communication and Culture, Ron is a boundary breaking scholar who uses new media not to reinvent or reinterpret the past, but to reestablish it. He holds a PhD in Romanticism and Literary Theory from the University of Florida and a Masters in British Literature from Boston College.

Teacher, multimedia artist & poet, Kyle holds degrees in both Physics and English Literature. He has an abiding interest in any aspect of technology that can be used to build community.

Painter and photographer, has been living in Atlanta for the past six years. His photographs have been shown and sold from the street corners of New York City to its Museums such as the Museum of Modern Art to the Brooklyn Museum and all places in between, at least on the East coast. His paintings, which are  the mainstay of his creative-ness, have garnered him no public, critical, or financial support.

Deidre is a long-time player in Atlanta's art scene. A published poet and respected (and occasionally feared) performance artist she takes her art with her where ever she goes. (Usually to the surprise and delight those around her.)

Cast on to the desolate streets of Stepney at 18 and into the nascent Public Image Ltd. (PIL), Jah Wobble was fundamental in shaping the virulent nihilism of punk into sonic and melodic extremes that evoked everything from dub reggae to Stockhausen.

The selections of audio in this project are taken from Wobble's 1996 The Inspiration of William Blake CD. It is best described by Paul Johnson's review of the re-released album in March 2001 for Uncut