Though automata have existed since antiquity, the proliferation, sophistication, and spectacle of eighteenth and nineteenth-century automata have been of particular interest for writers, scientists, philosophers, historians, and literary critics both during the Romantic period and today. The Romantic fascination with automata has been investigated using numerous theoretical and historical lenses: Freud’s essay on the uncanny; Marx’s theories of the impact of automated industry on labor in Das Kapital;  and contemporary studies that link automata to the Gothic, to gender studies, to visual spectacle, and to the history of artificial life. This gallery puts “real” automata in conversation with a wide array of other machines, spectacles, and contemporary representations in order to recontextualize automata within and at the borders of the Romantic era. Consequently, this gallery seeks to show that the proliferation of automata in the eighteenth century helped shape Romantic sensibilities by producing anxieties and ambivalences around such notions as human distinctiveness, individuality in a society of replicating social types, new technologies, and international and colonial trade. Though this gallery takes diversity as one of its aims, two of the reigning themes pursued are, first, the complexities of discerning “real” as opposed to “fake” artificiality, and, second, the increasingly, though not straightforwardly, hybridized human and/or machine body. This gallery thus exhibits its own eclectic, traveling, mechanical show—from famous automata to luxury clocks, planetariums, optical devices, puppets, political caricatures, and industrial technologies; from near-perfect simulations to flat-out hoaxes; from scientific investigations to royal scandals; and with stops in London, China, Europe, and antebellum America.

Mr. Cox's Perpetual Motion, A Prize in the Museum Library

James Cox, c. 1723-1800, was a London-based jeweler and mechanic. He was known for his short-lived but popular Cox’s Museum, which exhibited elaborate automata, clocks, jewelry, and other luxury items. This print depicts one of the luxury clocks exhibited at Cox’s Museum and sold during Cox’s lottery in 1774-1775 along with numerous automata. 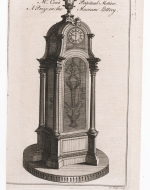 This engraving depicts an oval bust portrait of John Joseph Merlin (1735 -1803)—the famous London-based inventor, creator, and exhibitor of automata—with one of his inventions, a mechanical chariot. 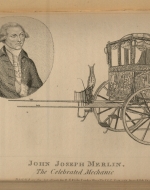 This image is taken from an entry on “Automaton” in Andrew Ure’s A Dictionary of Arts, Manufactures, and Mines (11th ed., 1847). It includes an illustration of an automaton swan, accompanied by an explanation of its mechanism. 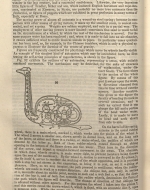 Automaton Swan
Main Description: In his A Dictionary of Arts, Manufactures, and Mines, Andrew Ure provides a lengthy explanation for the mechanical workings displayed in this simple line-drawing. He begins by describing its basic movements:

Fig. 92 exhibits the outlines of an automaton, representing a...

The Chronometer and Planetarium System

The Chronometer and Planetarium System is an illustrative plate that accompanies a pamphlet on the famous mechanical planetarium invented by the German engineer Philipp Matthäus Hahn (1739-1790). Like James Cox’s perpetual clock, Hahn’s planetarium highlights the importance of clockwork mechanism to eighteenth-century mechanical engineering, scientific explanation and display, and automata. 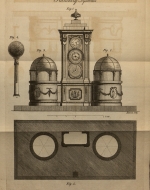 The Chronometer and Planetarium System
Main Description: The Chronometer and Planetarium System plate is accompanied by an explanatory key on the preceding two pages of the text. Most of the bottom of the print is taken up by Fig. 5, a rectangular figure whose purpose within the planetarium is not fully explained by the text. Above this is a...
George Adams's <em>An Essay on Vision</em>: The Artificial Eye

This plate depicts a prominent mathematical and optical instrument, George Adams’ camera obscura model of vision, as well as several optical experiments proposed in the book. Of particular interest to this gallery is fig. 7 in the lower left-hand of the print, which is a depiction of one of Adams’s optical instruments—the artificial eye. Though not mechanical, the artificial eye can be tied to theories of automata in that it both simulates bodily processes and calls attention to the limits of simulation and mechanization. 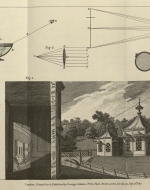 Fig. 1. (right-hand corner): a cross-section of the...
The Chess Player

This print depicts in eleven figures the proposed “mechanism” (and hoax) of the famous chess player, created by Baron Wolfgang von Kempelen in 1769 and later owned and exhibited by Johann Maelzel in Europe and the United States. 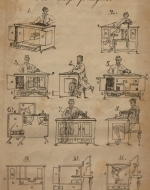 The Chess Player
Main Description: This print is taken from the final plate of the pamphlet, and depicts in eleven figures the proposed mechanism of the chess player. The figures do not represent a chronological progression, but rather depict various views of the mechanism, with particular emphasis on the positions that the...
The English Ladies Dandy Toy

In this 1818 print caricature by Isaac Robert Cruikshank, a doll-faced woman holds a puppet styled as a dandy. Cruikshank’s print betrays the same preoccupations with mimetic doubling, mechanic manipulation, and gender anxiety that contemporary discourse of the period produced in abundance. 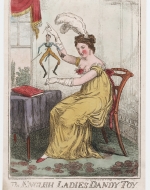 A good-looking young woman, looking down and to the r., holds by two strings a jointed puppet (a pantin, a toy for ladies in vogue in the mid-eighteenth century . . . ) in the form of a dandy: in one hand is an umbrella . . . in the other...

Winding up to a pitch the Automaton Scaramouch, --or--, Harlequin Courier’s Delight

This politically satiric print, produced after the unsuccessful trial of Queen Caroline for divorce on the grounds of adultery, depicts Queen Caroline as the puppet and/or automaton of her lover Bartolomeo Pergami (aka Bergami), dressed as a Harlequin at her estate at Lake Como, Italy. 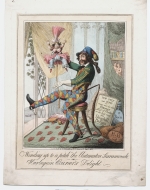 Winding up to a pitch the Automaton Scaramouch, --or--, Harlequin Courier’s Delight
Main Description: This political caricature depicts Queen Caroline as a puppet of her lover Bartolomeo Pergami (aka Bergami). Dorothy George describes the print as follows:

Bergami, mustachioed, whiskered, and alluring, in a tight-fitting harlequin’s suit over which is a short gold-laced jacket, sits on...

This illustration of a partially steam-powered printing press is taken from an entry on “The Printing Machine” in Andrew Ure’s A Dictionary of Arts, Manufactures, and Mines (11th ed., 1847). Identifying narratives of progress, Ure’s text draws explicit parallels between popular automata and industrialization. 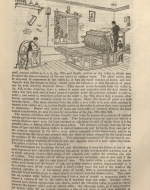 The Printing Machine
Main Description: In this drawing of a printing machine patented by “Messrs. Applegath and Cowper,” two men work at the press while one man operates a fly-wheel pulley system. The figure at the back of the machine piles sheets of paper while

the boy, who stands on the adjoining platform, takes up one...

This detailed print satirizes new steam technologies and social types by depicting an imaginary, steam-generated shaving machine; in the image, customers are groomed by a complicated and dangerous piece of machinery. Shaving by Steam exemplifies the Romantic interest in and horror at the ways in which automated mechanisms double, fracture, and alter individual, gendered bodies and subjectivities. 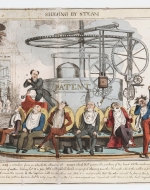 A complicated piece of machinery fills the centre of a room in a fashionable establishment; an open door (r.) leads into a shop where, in the background, a pretty and extravagantly dressed woman (in the costume of c. 1828) presides at a...