Epitomized by Caspar David Friedrich’s Wanderer Watching a Sea of Fog (c. 1817-18), and the Wordsworthian peripatetic, the gentlemanly or artistic wanderer is integral to the Romantic imagination. Wandering lies at the heart of picturesque sightseeing, blank verse poetry, specimen collecting, and the Romantic cultivation of self. However, these forms of sanctioned wandering exist against a backdrop of less desirable movements that, nonetheless, inform, color and at times literally converge with the endorsed amblings of the inquisitive artist-gentlemen. Unsanctioned forms of wandering existed on a spectrum of criminality, which at times included peddlers, actors, shepherds, discharged soldiers, beggars, orphaned children, gypsies, sailors, highwaymen, and pirates, among others. These disparate groups, while often meticulously differentiated, were also increasingly amalgamated as vagrants through a series of common burdens and discriminatory practices, resulting from the enclosure of common lands and changing Poor Laws, licensing, and Vagrancy Acts in the eighteenth and early nineteenth centuries. This gallery seeks to explore some of the strategies of representation used to capture the vagrant body in print—and, furthermore, to tease out some of the tensions and slippages between the text as material object and the roaming body it seeks to arrest.

View from My Own Cottage, in Essex 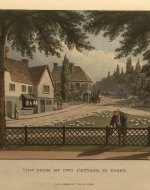 View from My Own Cottage, in Essex (before)
Main Description: This image gives a view of a fork in the road, along which pedestrians and carriages travel. The road is lined with two-story buildings; hanging meat in a window and large signs suggest a commercial avenue. In the foreground, a lattice fence and two trees frame the view. A man with an eye patch,...
View from My Own Cottage, in Essex 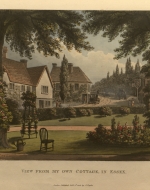 View from My Own Cottage, in Essex (after)
Main Description: This image presents the same view as the first in the gallery, with some alterations (the over-slip attached to the illustration constituted by these two images has been lifted). We still have a view of a fork in the road, but the signs and pedestrians are now mostly concealed by a new hedge. The...
The Trwe Effigies of James Whitney, the Notorious Highwayman.

Despite his status as a vagabond and criminal, Whitney (following the conventions of late 17th- and early 18th-century portraiture) is shown in the dressing gown of an artist-gentleman. This unusual citation speaks to the conflation of artistic and wandering types in the Romantic period. 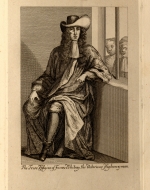 The Trwe Effigies of James Whitney, the Notorious Highwayman.
Main Description: A man, imprisoned, sits in the corner of a cell next to a barred window through which two figures stare. The captive wears a large brimmed hat, long curled wig, and cravat, which date the sitter to the late seventeenth or early eighteenth century. He wears a loose, patterned gown, which is lifted...
Margaret Finch (Queen of the Gypsies at Norwood)

Margaret Finch’s status as “Queen of the Gypsies” contributes to a common construction of Romanie culture as organized along a separate, but parallel hierarchy, which mimics and perverts the authority of the English crown. 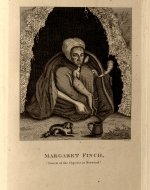 Margaret Finch (Queen of the Gypsies at Norwood)
Main Description: In a small, dark, cave-like dwelling, a woman with a creased brow and elongated nose sits crouched with her knees to her chest. She wears a white bonnet and large cloak, and she smokes a slender clay pipe. A dog, standing on its hind legs, licks her chin, and a second canine companion lies in the...
Gypsy Encampment

There is a consistent tension in Romantic descriptions of Gypsies between celebrating the freedom of nomadism and bemoaning the squalid conditions of homelessness. This print visualizes this tension by giving us images of both dignity and depravity and by simultaneously suggesting the idyllic and the condemnable conditions of a wandering existence. 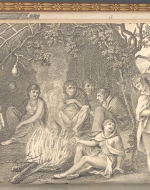 Gypsy Encampment
Main Description: Within a rocky landscape is situated a large, cave-like dwelling constructed of leaves and branches. Six adult figures and two small children sit or squat around a smoky fire, while two additional figures approach the encampment with freshly caught fish. Most of the figures have short-cropped hair...
Nomad and two children

The woman’s elongated stature illustrates the belief that gypsy women were made more rugged and masculine through the hardships of a nomadic existence. This construction of the gypsy was one of many ways in which their peculiarity as a distinct race was conceptualized as a result of environment and lifestyle, rather than intrinsic or biological difference. 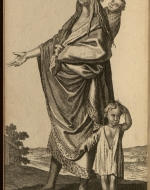 Nomad and two children
Main Description: A woman travels through a landscape with two children: an infant held to her back in a shawl, and a young child who stands beside her and holds the hem of her cloak. The woman has long hair and a scarf tied around her forehead; she clutches the shawl in which the infant rides with her left hand,...
Pirate and Gypsy 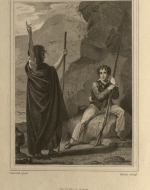 Pirate and Gypsy
Main Description: A young man, seated with a long rifle on a rock, wears a dark jacket and light trousers. A horn is strung around his neck and a brimmed hat lies at his side. He is addressed by a woman with a large staff who is dressed in a long patterned skirt and a long dark cloak. With her right hand she points...
Portrait of Lady Caroline Montagu in Byronic Costume 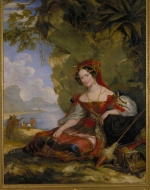 Portrait of Lady Caroline Montagu in Byronic Costume
Main Description: This portrait depicts a young woman, in colorful costume, seated on the ground against a large rock by the sea. The large outcrop of rock is crowned with a variety of vegetation. Mountains can be seen against the clouded blue sky to her left. The female figure is shown in the three-quarter position...
Joseph Johnson (Black Joe of N4 Chandos Street, Covent Garden)

While the unemployed (or seemingly unemployed) were often considered a problem or nuisance, they were also admired for their creativity and theatrics. Additionally, the supposed racial difference of a wandering vagrant often contributed to his perceived novelty. 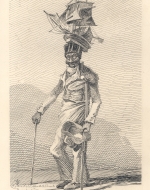 Joseph Johnson (Black Joe of N4 Chandos Street, Covent Garden)
Main Description: A black man in a sailor’s uniform leans on a crutch and cane in a nondescript environment. In his left hand he holds a brimmed hat, while atop his head sits an elaborate model ship affixed to a simple cylindrical cap.
Historiated Initial “B”

The man that both personifies beggary and entwines his body with the inauguratory letter of the word that seeks to classify him, seems also to execute the action for which the beggar is best known—he picks up the letter and begins to move as if to take the letter from the page. This action suggests the tension between the text as a material object and the subject it seeks to contain. 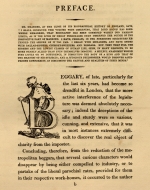 Historiated Initial “B”
Main Description: A man in a long cape and cloth cap holds a cane in his right hand and a large letter “B” in his left as he walks. He has a beard and moustache, and a rimmed black hat hangs from his neck.
Victor, the Savage of Aveyron

The attempted domestication of Victor, the "wild child," or white European boy found living in the wilderness, speaks to the presumed correlation between stasis, education and civility and presents his previous mobility as an affront to these values. 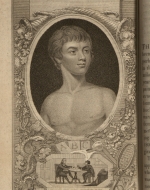 Victor, the Savage of Aveyron
Main Description: A young, nude boy is depicted against a dark background in a bust medallion. Two cornucopias entwine above his head, spilling forth fruit and foliage as a border around the frame. Below is a smaller scene in which a teacher and pupil sit at a round table for a lesson in literacy. This smaller panel...